Peder Pederson, a pioneer in the Conejo Valley and a long time member of Ascension Lutheran Church went to his eternal rest on July 30, 1976.  “Pete” as he was known, had a deep and abiding faith in his risen Lord and lived his faith out in his daily life.  Ironically, the task at which he spent most of his life, farming, did not produce the wealth that he was later to acquire.  It was the development of his farmland in the Conejo Valley for housing that produced significant amounts of financial resources.  Pete continued a very modest lifestyle while using his wealth to serve his Lord.

Ascension Lutheran Church, California Lutheran College and the American Lutheran Church were named in Pete’s will.  Ascension Lutheran Church received $199,755.88 in cash and other assets.  What a blessing – one unrestricted gift nearly equaling the entire budget for that year!  Dreams began to take shape for buildings, programs, staff, benevolences and other needs that a gift of this size helps make possible.  However, many felt that this gift should not be spent for “things;” rather, the money should be invested and the interest should be used to further the work of God’s kingdom, thus ensuring perpetual income to do the Lord’s work while never depleting the original fund.

In September 1977, the Church Council, under the leadership of Bob Shoup, established the Pederson Fund Ad Hoc Committee.  Roy and Barbara Foerster, Bill and Arlene Hooper, Karsten and Kim Lundring, Karl and Lillian Torgerson, and Ollie and Maria Trumbauer were appointed to this ad hoc committee.  After many hours of investigation, deliberation, and prayer, the Committee recommended to the Church Council that the Ascension Lutheran Church Foundation be established.  They recommended further that the Pederson fund be placed into the Foundation along with other funds as may be made available through bequests, memorials, and gifts.  It was further recommended that the Foundation be governed by a 13 member Board of Trustees. 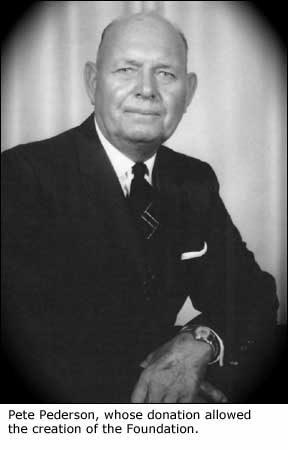